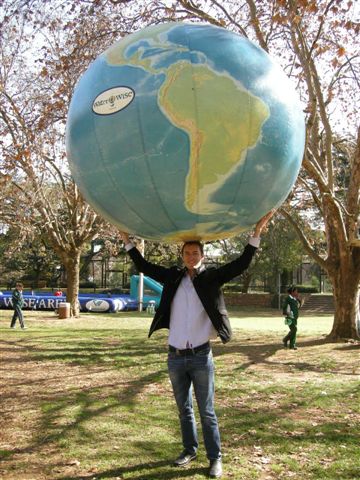 Ever since he was a little boy (with at least 2 entrepreneurial projects on the go always) Mathew has presented to the world an indomitable spirit, boundless entrepreneurial talent, shown that he is undaunted by hard work and lucky for us, chose to bring these traits to the urgent need to raise awareness about climate change.

Mathew was born and raised in Gauteng, matriculated from Redhill High School in 1998 and proceeded to slam dunk a BSc with majors in Genetics and Environmental and Conservation Biology at Wits University – while working full-time nogal! He then proceeded to Honours and Masters in Environmental and Conservation Biology also at Wits and is currently about to complete his 2nd Masters in Applied Ethics. While completing his postgraduate studies Mathew has partnered on the start up of several enterprises, including General manager of a Bird garden and acting as a consultant to NGO’s with social or environmental missions.

Towards the end of 2008 Mathew began to realise fully the urgency to take action on Climate change and in his pursuit of an ideal way to proceed, heard out about Project 90 by 2030. In June 2009 Mathew joined the project as Gauteng clubs coordinator and in September when we needed a project manager for our 2009 climate challenge, Mathew stepped up and demonstrated what he is capable of under pressure – a marvellously coordinated, effectively publicised and successful campaign which had a significant effect on the numbers of people we have been able to reach since.

Mathew was promoted to Programme manager for Mitigation in January 2010 and is effectively the deputy director of Project 90. He has grown to be a priceless member of the team and is widely regarded within the project and among working partners as a fresh and innovative thinker who manages to see opportunities where others see hassles and who is able to keep a steady eye on the mark while getting on with the detail of implementation.

Happy Birthday Mathew – you have achieved much in these first 30 years of your life and we look forward to seeing what you make of the next 30!

-Your colleagues at Project 90

This entry was posted in Project 90, Uncategorized and tagged Project 90. Bookmark the permalink.