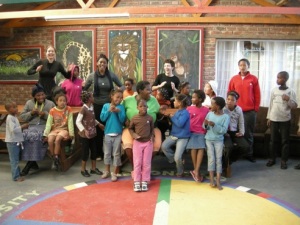 Project 90×2030 has partnered with Cosmos Productions to take the innovative climate change play, Joyce’s Choices, to learners around the Eastern Cape. This play follows Joyce and the environmental choices she makes every day into the future: a hot, hot place where winter ceases to exist and water restrictions are commonplace. The play aims to raise awareness of climate change issues amongst high school learners and educators while inspiring them to take action, to create change in their lives and the lives of others. The play touches on humanity’s attachment to a consumer culture and how this is impacting adversely on our environment.

On August 23rd their small committed team, including Project 90’s Clubs Coordinator Daniel Robinson , set out from Cape Town on a school tour where the play was performed 15 times for around 2 146 high school learners.

Performances were followed by a workshop exploring climate change and environmental issues. This was an exciting space where audience members were asked to reflect on the content of the play and to imagine a world that they wanted to live in one day. It was amazing for all of us to see the future which many of the young people were longing for! Their futures were filled with restored natural environments and complex technologies to address the impact of climate and human needs. They were creative, inspiring and complex.

Once the workshop participants had created their imagined worlds, we asked them to identify the specific actions they could take in their lives to begin to create a world they wanted to live in. This brought the discussion back into the present…again we were continuously reminded of the resourcefulness and resilience of young people to tackle the challenges they will have to face in their future!

More news to follow about the second leg of the tour at schools in and around Cape Town!