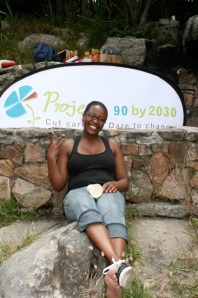 2010 has been a busy year for the Core Clubs in Cape Town. In April and May the clubs took part in two alien plantation hacks at the Kenilworth Racecourse Conservation Area, followed by a visit to Goedgedacht Farm for World Environment Day on 5th June. Then in November two clubs took part in the Children’s Radio Workshop on climate change. Throughout the year the clubs have worked on their own projects, aiming to reduce their schools carbon footprint. They’ve really done some amazing work and everybody at Project 90 looks forward to an exciting 2011.

It’s quite incredible that Cape Town can be warm, sunny and windless for days on end, however when you plan a day to hold an event the south easter decides to blast its way over the mountain. In fact the weather was perfect for hiking, but for swimming it was up to the brave, namely myself and Art from Waldorf Constantia to take to the waters of the Silvermine Dam. For the afternoon we sat on the rocks, ate fruit and cake, chatted and planned our first of many flash mobs.

A Sunday afternoon at 1:30 pm is prime time for families to eat their picnics and gaze at the stunning scenery, so we decided to take over the Dam(n) Wall and create a little buzz. Everybody lined up on the wall, took their positions and started a rhythm, becoming faster and faster, until we sent a Mexican wave down the line followed by Project 90s tag – Cut Carbon, Dare to Change.

It certainly caused a little stir in the tranquil setting of Silvermine. Watch this space for much more to come in 2011!!