What does sustainable construction and lemon pie have in common? 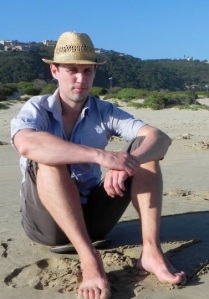 Last week we bid a fond farewell to Olivier Million, our fantastic volunteer from France. He approached us out of the blue asking if he could volunteer with us for two months while staying in South Africa. How could we say no!

Living in Paris he met many people who had been to SA and he became intrigued by our country, so when the opportunity arose, he packed his bags and left for Cape Town. He came across Project 90 on the Internet and felt that our name and mission related to an ambitious task that he believed he could be part of.

With a background in mechanical engineering  and an advanced masters degree in sustainable construction and building, Olivier helped Robert with improving tools to assess the set up of net metering in the City of Cape Town. He helped with the travel section of our carbon footprint calculator, worked on a tool he had created in France for rainfall water reuse which he
adapted for SA and created a tool to help households to size a Photovoltaic system for their house.

Olivier says: “SA is a country full of surprises with a lot of different things to discover, I really enjoyed going on field trips to see what Project 90 did in practical terms. But if I had to keep one thing, it would be the weekend I spent in Khayelitsha township. I really enjoyed discovering another face of South Africa, way more happier than one could think. And more than that, I believed it confirmed my choice to work for construction with a humanitarian goal”.

Olivier loved the fact that it was 30 degrees here in CT while being cold and dark back in Europe and he loved the laid back atmosphere of Cape Town. The proximity to the beach and hiking routes on Table Mountain were also a big bonus. He did however take some time getting used to driving on the right hand side. He would often climb in the car on the left and wonder what had happened to the steering wheel!

But I think the best part about having Olivier with us was the food! Not only did he bring us pancakes with Nutella on French National Pancake Day, he also baked us his speciality and favourite cake, a delicious lemon pie.

Olivier is now enjoying a three week road trip in Namibia before heading back to France.

From all of us at Project 90, we would like to thank you for all your very hard work over the last two months. It was great getting to know you and we wish you all the best for the future!

This entry was posted in Project 90 and tagged Project 90. Bookmark the permalink.

One response to “What does sustainable construction and lemon pie have in common?”