Nix nuclear from our energy mix 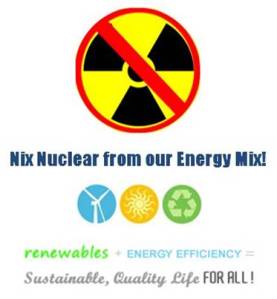 Project 90 by 2030 supports the Earthlife Africa and Coalition Against Nuclear Energy events commemorating 25 Years since Chernobyl.

UNCLEAR WHAT TO DO WITH THE LONG-TERM WASTE

UNCLEAR HOW MUCH TAX-MONEY GOES INTO SUBSIDISING NUCLEAR POWER

UNCLEAR WHY WE’RE SPENDING OUR TAX MONEY ON SUCH AN EXPENSIVE, DANGEROUS, NON-RENEWABLE TECHNOLOGY, WHEN THERE ARE TRIED, TESTED, SAFE, RENEWABLE TECHNOLOGIES – WHICH CAN BE UP AND RUNNING IN JUST A FEW YEARS!

3 responses to “Nix nuclear from our energy mix”