Imagining yourself in drawings and words

It’s just after 5 am and I’m lying in my sleeping bag on an old foam mattress and a rickety iron bed. My mind is racing, plotting and planning for the next day.  Soft rain and cold air gently caress the fogged up windows of our 18-bed classroom, and my thoughts drift from things I want to share with the participants, ideas to discuss with my fellow facilitators, to how to capture key moments on camera and film. It is the second day of our three-day first Youth Forum meeting, and we are lodging together on the third and highest story of a classroom block at PJ Olivier High School atop a hill overlooking Grahamstown. Between my racing thoughts there is the occasional snore of one of the participants, an assortment of cellphone alarms, music from some of the sleepless festival theatre groups blaring from the ground floor, and the smell of cooked onions wafting up the stairs and down the corridors. As one of the participants said to me when she first arrived after a long journey from the interior, “We are not here for comfort, we are here to learn and to make a difference”.

The kind of world we imagine…

After a heroic and very rushed logistical effort by our support staff, 16 of South Africa’s most promising environmental champions between the ages of 16 and 23 descended on a cold, wet, and stormy Grahamstown. To our amazement and no doubt thanks to the conscientious efforts of or support staff, the participants all arrived without a glitch, as they drifted in from the various corners of our country. Some came from as far afield as the northern Cape and Limpopo, others from Lusikisiki, KZN and various locations in Gauteng and the Western Cape. For most of them it was the first time they had been to Grahamstown, and in some cases, the first time they had left their own province. 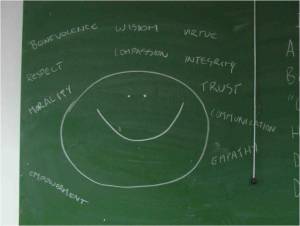 The values we bring

The town was alive with the energy and buzz of the annual Festival of the Arts.  We had arranged this meeting for them to meet and connect with each other and with the facilitators, and to participate inthe Re-imagining Festival, hosted by the Environmental Learning Research Centre (ELRC). All our sessions were held at the ELRC Sustainability Commons, right next to the Botanical Gardens.

The intention of the Youth Forum is that each participant is enabled to manifest their full leadership potential, and is involved in creating and delivering a powerful message around climate change and sustainability to business leaders, decision-makers and negotiators in the run-up to the 17thConference of the Parties (COP) to be held in Durban later this year.

The facilitation team was ably comprised of Dylan McGarry of COPART, who was also curating the Re-imagining Festival as a new event at the Grahamstown Festival, Kyla Davis of Well Worn Theatre and a regular collaborator with Project 90, Daniel Robinson, one of Project 90’s School Club coordinators with Karen Goldberg and Stephen Davis at the facilitation helm. The team assembled before the participants arrived, and finalised the timetable and prepared the space for the next 3 days of activities.

Since we had very little time with the participants we developed an intensive programme for the two days we had together. We began at 5pm on the Sunday with fun introduction exercises, an introduction and overview of plans for the first meeting, and the Youth Forum overall, the ground rules for participation, and the expression of expectations for the first meeting. This first step was crucial in allowing us all to connect with one another, form a team, and create a safe space for the participants to feel at ease to contribute to the process, embrace their diversity and speak openly, with all views held respectfully and confidentially. The evening closed with vegetarian dinner providedby Isandlo, who catered forour lunch and dinners for the duration of our meeting.

The intention for the Monday, the second day,was to take the participants on a personal leadership journey aimed at put them – as change agents – centre stage, rather than focusing from the outset on the myriad of external issues and challenges in relation to climate change. The day began with Karen facilitating an imaginative drawing exercise aimed at helping participants seeing the connections between their present experience of themselves and the kind of leader or person they are aspiring to be: namely the qualities and characteristics that they would like to embody. This process aimed to seek congruence between how they would like to be in the world, the world they would like to live in, and how they approach the issues of Climate Change in general and the Youth Forum in particular. Having completed their drawings and intentions for themselves, they first shared their insights with one other person, in the process learning about deep empathic listening, after which, the discussion was brought back into the group space.

After lunch, Dylan facilitated the Earth Forum, a profound workshop designed to allow people to connect and share what matters most to them as one of the Earth’s citizens, and what their hopes are for the earth and what they bring as custodians of the earth. In this exercise I was deeply touched by the humanity of all of the youth, their openness, and their commitment to being custodians of our future. I was also inspired by how articulate they were with issues that I consider myself well-versed in after working in the energy-environment-climate change field for the past 4 years of my adult life. It was also incredible to see how involved they already are in projects or programmes within their school or community and realizing that the arevery much part of an emerging groundswell in our society.

50/50 were scouting around for festival activities related to environment, and made their presence known to us when they heard about the Youth Forum. In one of our tea breaks, they interviewed some of participants for a TV insertto be aired in a few weeks’ time.

In the late afternoon, the facilitators began the process of guiding participants towards what message they want to deliver, and how, using the expectations articulated on the first evening as the entry point. Many of those expectations had been around how to influence, communicate or shift people’s mindsets. Instead of providing answers ourselves, we provided an opportunity for the participants to connect with their personal experiences in relation to these questions. The insights gained from this exercise provided deep insights for understanding what kinds of messaging will really transform our society. With that solid foundation, we brainstormed modes of presentation for August, interim activities and the kinds of messages that have the power to transform and motivate decision-makers.

At this point we seamlessly handed over the leadership of the process to the youth, knowing and trusting that they will produce something remarkable at the meeting with the delegates in August. They spent the evening brainstorming the overall structure of their presentation in August, which was presented to the facilitators and discussed in more detail the following morning. The remainder of the morning was then used for reflection of the preceding two days and finalizing remaining logistics.

In terms of communication channels, theydecided that a communication platform will be set up via Facebook, and groups were formed depending on their preferred mode of presentation (e.g. creative mediums such as poetry, singing and drama or presentation-style modes). We also discussed how to connect with the remaining 4 participants who were unable to attend the first meeting.

Mentors from the facilitation team will be assigned to the various groups, and we will supply them with information on the delegates so they understand their audience, and we enrolled them in a low-carbon mode of travel to the meeting that will most likely take place in Johannesburg.

Reflecting back on those three days, I’m aglow with the pride that comes with being part of the Project 90 by 2030 Youth Forum and altogether excited by what’s possible in our country with a committed, enthusiastic and passionate group of future leaders such as the one we have gathered together.

Personally this has been one of the most fulfilling projects I have every been involved in, and I’ve been buzzing ever since I left Grahamstown, knowing that with the likes of the 20 young leaders of the Youth Forum, our society and our future is in very capable hands.

From the 21st to 24th August, these 20 young leaders will meet with business leaders, negotiators and decision-makers, in order to share their experiences and views on the issues, and to inspire these leaders with creativity, passion and enthusiasm unlike anything that’s ever been witnessed…

One response to “Youth forum first meeting a resounding success!”