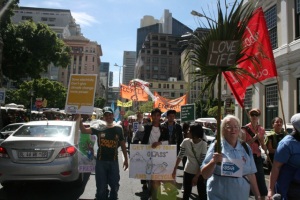 Moving Planet procession through the streets of Cape Town

Participating in Moving Planet 350, on September the 24th, was an experience I’ll never forget. This worldwide march took place in over 175 countries and being part of it here in Cape Town was incredible! Myself and other members of Project 90 were met by a vibrant group of people, who all have the same aim.

We want to raise environmental awareness and encourage people to take action to greatly reduce their carbon emissions. It was amazing to see people of all ages participating in the march. Many people walked, some skateboarded, others rode J-boards, and there were even people on push scooters. There were no cars or motorbikes or any other fossil fuel using vehicles and this was one of the aims of the fantastic march. To encourage people to use forms of transport which do not release harmful substances into the environment. 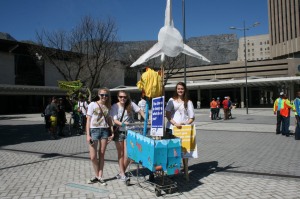 We made a float for the occasion to promote renewable energy, which involved water, wind and solar energy. We painted the sides of the trolley blue and made sea creatures, this represented water. We covered an old fan in yellow material and joined it to a long stick to represent the sun. Lastly we used what was left of the fan to make a wind turbine. Marching alongside many other floats and banners to the beat of a marching band promoting environmental awareness, something I feel so strongly about, is something I’ll always remember.

The youth of today were there in full spirit demanding no fossils and more renewable energy for South Africa and the world. I truly believe that Moving Planet 350 has made a difference!

For more pics of the Moving Planet event, visit our facebook page: