Living off-grid – it can be done 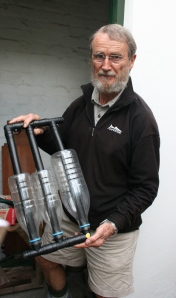 “My dream is to become independent of Eskom electricity and municipal water” Anthony Keen.

I visited the home of Anthony and Rosemary Keen. Tucked in the leafy suburb of Rondebosch, their home is slightly different from their surrounding neighbours. The difference being that they hardly use any electricity from Eskom. You may be imagining a small shed with a few candles, but you would be mistaken. Their home is like any other in that neighbourhood – it has all the mod cons, stove, washing machine, tumble dryer, a pool, etc.

How does Anthony do it? With a mixture of a solar water heater to heat water for bathing and showering and 20 solar PV panels on his roof to generate electricity. On days when the sun is not shining continuously, he has a battery bank and for when it is continuously overcast for a few days the LPG gas back- up generator kicks in, but this happens very seldom. 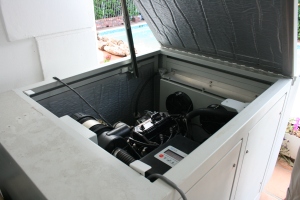 This LPG generator provides back up electricity

Anthony is a true pioneer in going off the grid – he installed his solar water heater 28 years ago (a 350litre geyser and a 6m2 plate collector). But although his home is fitted with renewable energy, he first started by reducing his energy use – by 71%!  Anthony and Rosemary installed roof insulation, geyser and pipe insulation,  draft exclusion,  energy saving lightbulbs, reduced the running time of their pool pump and are diligent when it comes to energy efficiency. All their appliances have a high energy efficiency rating. To help monitor daily energy use, Anthony made his own energy consumption monitor from old scavenged parts. Nowadays of course you can buy a energy monitor such as the OWL  or efergy.

When it becomes too cold to swim, their pool is covered so that the pool pump does not need to run throughout the winter months.  The family cooks with gas (except for the oven) and they don’t use space heaters, instead making wood fires using wood collected during the year from trimmed and felled trees in their area.  All appliances are run during the day when there is lots of sunlight and the geyser has a manual switch and a timer to ensure that it is not on all the time, in fact the geyser is on only switched on for a few weeks during the winter period. Their roof is painted white which keeps the house cool in summer – by about 5 degrees less. 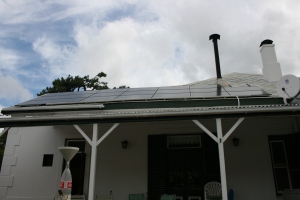 The PV panels are mounted on frames a few centimetres from the roof, which prevents the build up of leaves and other debris. The panels have a  nominal output of 3.8kW but on cold and sunny days produce up to 5.3kW. This solar system cost around R262,000 six years ago, but the good news is that the cost of solar PV is decreasing every year. Six years ago panels cost R38/W; today they cost R10/W.

Anthony also has a battery system to store energy. These batteries ensure that when the sun isn’t shining there is still electricity available – this lasts for at least one day or even more when the family avoids using the big appliances. He has an 8kW MLT-inverter which is the heart of the system. The inverter manages the charge and discharge of the batteries, converts the direct current (DC) to alternate current (AC), synchronises the PV-system with the grid. On top of all of that it comes with an online energy management system, which has many features and Anthony has learned to customize the parameters of the inverter, which allows him to run the system in two modes: Net metering or off-grid. On his laptop Anthony monitors his energy use and tweaks his systems manually to ensure optimal use.

Anthony is also building a solar water heater made from recycled plastic milk bottles which he plans to set up as a demo in a community in the Cederberg. 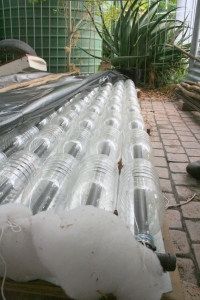 This home-made SWH can heat water up to 75 degrees

But it is not only energy that Anthony and his wife are conscious of – they are also very aware of water use. Water collected in their roof gutters is piped into the swimming pool and collected in one of their many water tanks.

He has built a grey water system so that all the water used in the house is pumped and used in the garden. His rain water tank capacity is 20,000 litres (4 tanks). But in order for the winter rain to last throughout summer for the garden he would need many more! That’s why he had a borehole installed – where the solar powered pump raises water into a holding tank. This is great for watering the garden; however it is not drinkable due to the high iron content. But Anthony is experimenting with water treatment in a test column and hopes to be able to produce potable water from the bore hole in the near future. 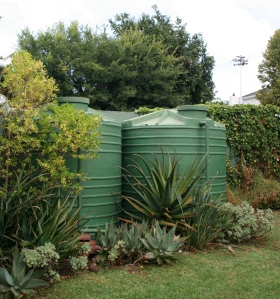 We previously wrote about the regulations around net metering (see previous blog post here) and Anthony has been following this process to get himself licensed to produce his own electricity and be certified as an Independent Power Producer. This would allow him to put excess electricity he doesn’t use back into the grid. The process has been very slow and he is now busy filling out the last of the many forms that he needs to submit and then hopes to get a response from the City of Cape Town.

3 responses to “Living off-grid – it can be done”