Project 90 and civil society at COP17 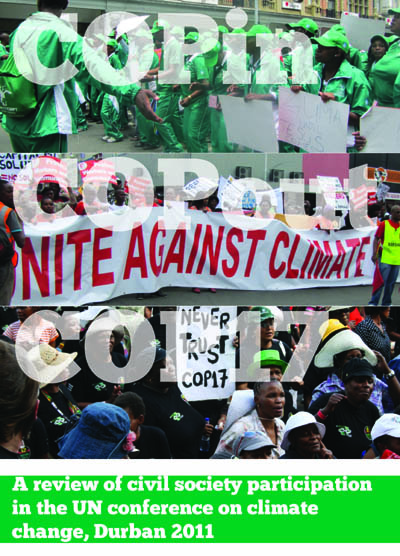 Civil society played an inportant role in the negotiations

There were more than 6000 civil society organisations at COP17 many of which were international organisations. In various ways, they were united behind the goal of meaningful action on climate change. Many of these NGOs also belong to or make up networks of organisations like tcktcktck and 350.org .

In South Africa, a committee of 17 individuals from South African civil society organisations was elected by South African civil society to coordinate broad civil society interaction with COP17. This committee was known as C17. In Durban about 2,000 activists were based at a specially created ‘Climate Refugee Camp’, a mock refugee camp which was used to house and feed the activists. Civil society, labour and the general public used the University of KwaZulu-Natal as “The People’s Space”, an alternative space to the official venue during the conference.  A detailed review of civil society’s participation in the conference has been conducted by Earthlife Africa Johannesburg. Key findings of this review are included in the following:

Individual action plays a powerful role in our response to climate change. We understand that the scale of climate change requires an adequate response at global level. While the UNFCCC process is currently the only legitimate mechanism to create a platform where all countries, global business and civil society can work together to address the challenges of climate change, this is a long, painful and resource-draining process.

Project 90 resolved to stay away from Durban. Through our scope of activities – our contributions to national climate and energy policies, our educational approaches through the Project 90 Club-programme and the Youth Leadership Forum and finally our Renewable Energy demonstration site programme all premised on the core foundation of essential behaviour and lifestyle changes of the individual citizen – we have contributed and continue to contribute on an individual, local and national level to wider societal change.

Through these blogs and in our daily work we continue to raise awareness of climate change in general as well as the global negotiations, and we inspire people to take action. The last blog in this series on COP17 will show some of the things you can do to bring about change – stay tuned and roll up your sleeves!

One response to “Project 90 and civil society at COP17”