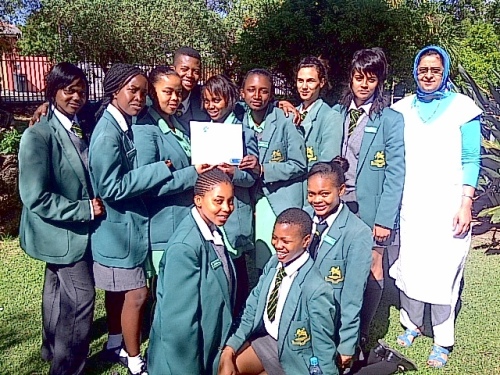 I met the club in the geography classroom. At the end of the school day, Aminah the club secretary, totally exhausted from writing a Science Olympiad, still enthusiastically helped me organise the desks before the rest of the club members arrived. On the classroom wall I noticed the club had written their core values onto a poster. It read ‘Integrity, Respect, Responsibility and Honesty’. A perfect basis for inspiring change.

As everyone arrived, the male to female ratio was not surprising. Only three out of the ten members attending the meeting were boys. This is a common theme in all the clubs I visit and I’ve often wondered why this is so. Are girls more sensitive to the environment at high school age or are they just generally more interested in extracurricular participation? I still do not have the answer, but would like to see more boys to take an active interest in environmental matters.

However, there is one boy in particular who is breaking the mould. Nkosinathi Madyosi, the president of the club aptly nicknamed ‘Obama’, tells me that in order to attract new members they’ve been speaking to their friends about the club and its activities. “It’s like a buddy system” he says. “I speak to my friends, who speak to their friends which creates a ripple effect.”

At the start of last year there were about four members regularly attending meetings, now there are usually 25. Not only do they have learner support but teachers have been eager to get involved too. Ms. Naajjar, the Geography teacher has been involved from the start and more recently Mr. Thompson, the Physics/Maths teacher and Mr. Long, the School Principal have become proud supporters of the club.

This year the club is organising a recycling project. They are collecting paper from each classroom, along with creating an Educational and Awareness Campaign to encourage the whole school to get behind them in their quest to recycle. Cardboard boxes have been collected and decorated, colourful posters have been designed and two very well spoken representatives of the club, ‘Obama’ and Thulisa, head of the Rhodes High School debate team, will be addressing their peers in assembly. Ms. Naajjar has organised for a company named Mpact to come and collect. They will weigh the waste, so that the club can record how much they are recycling AND they will receive cash back for all their hard work!

I asked the club if they had learnt anything since forming their club in 2010. After a long pause Obama cleared his throat and said that he believes that communication is the key. “To do anything you need to communicate clearly, particularly when the club is growing so large.” He has a good point. In all of the Project 90 Clubs, communication is the centre of everything and without it we’d all be lost. Learning to communicate objectively, passionately and creatively is an important skill we must continue to develop throughout our lives past high school and it is my hope that the learners are able to flex this muscle in the clubs.

It is truly a joy to have watched this Club make progress and I look forward to the end of the year to see what the impact of their recycling project and their visible passion has had on the rest of their school.

For more information on the Project 90 Clubs click here