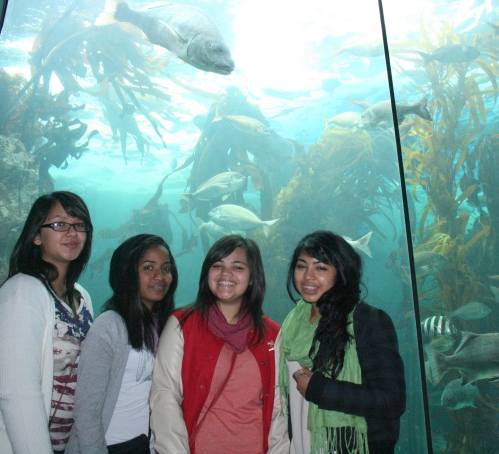 Cape Town clubs enjoying their visit to the aquarium

As the cold weather slowly set in, the rain fell down in Cape Town for one week and Table Mountain was impossible to see through the thick rain clouds. However on the morning of the 9th June, the heavy clouds began to part and the sun’s rays peered through the openings lighting up the sky, a perfect Cape winters day.

The aquarium was chosen as part of Project 90s Renewable Energy Demonstration Sites in 2011 and we thought it would be inspiring for the youth to see the potential of renewable energy technologies in action. On arriving Msa, the venue coordinator, led us to our venue for the day, a room called the Tranquility Lounge which shared a wall with a huge fish tank. As the sun shone through the clear blue water the kelp danced to the rhythm of the ocean and a variety of large fish serenely swam past the large window. A beautiful setting for the event.

The president of Rhodes High School, Nkosonathi Madyosi and his friend Tembinkosi arrived early and helped to set out the chairs and prepare the venue before everyone else arrived. We started a little late as the learners trickled in. Once everyone had arrived, we welcomed the learners and explained the plan for the day.  We watched a series of documentaries on the Project 90 Renewable Energy Demonstration Sites, followed by a question and answer session. The club members asked an array of interesting questions from ‘How much energy can be harnessed by a wind turbine or solar pv array?’ to ‘Are we able to feed excess energy back into the national grid?’. Brandon van Niekerk, the head of his Project 90 Club at South Peninsula High School who volunteers at the Aquarium on the weekends, took  everyone on a tour behind the scenes of the aquarium. Afterwards we enjoyed lunch and Robert Fischer, Project 90s Renewable Energy expert, came and spoke about the the vertical axis wind turbine and solar pv installations and answered more questions from the learners. All in all it was fun, educational and inspiring day. 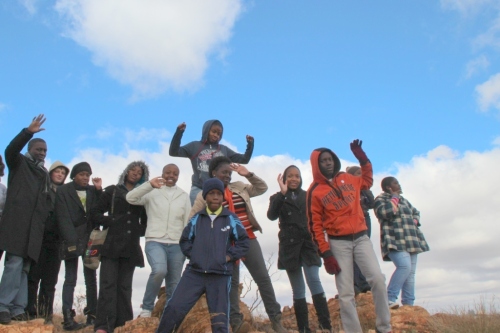 Our day out and about in Melville koppies, yes you read correctly, Melville koppies was not only green but it was “Project90-fied”…we had club members everywhere. The day was epic.

We had it all, from aspects of World Environment Day cross bred with Youth Day as well as personal behaviour/lifestyle change, the 9th of June started as early as 8 o’clock.

The day was cold but the air was filled with curiosity, everyone including myself was curious to know what lay ahead. The trail and hike of the koppies was cemented with a rich knowledge of the area and history of the greater district. We had talks and side discussions about the environment that we now call (Johannesburg) “Jozi Maboneng”, and the cultural history of the koppies. Also looking at the various cultures and civilisations that lived in this area over the years and how they adapted themselves to the environment.

Looking at the group, the club members got to share sweet talks and to experience something they generally do not do. Many members could not wait for lunch, which arrived a few minutes late, but was worth the wait. All I can say is that it was a great day, and that the club members are looking forward to the next event. 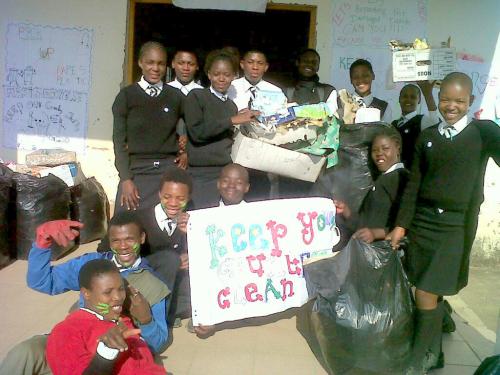 The event was planned in order to bring together three schools, Ginyane High School, Newtonville Primary School and Sonyongwana High School to support one another in a waste collection campaign. On the day before the event the provincial ward told the schools that they had to rewrite two papers on Wednesday afternoon.

However in the face of all these challenges on Wednesday 13th June, Sonyongwana High School chose to push ahead with their waste clean up campaign ‘Heal the Earth’s Wounds’. Twelve dedicated Project 90 club members gathered together to make a start on cleaning up their school. They divided themselves into three groups and picked up waste in three different places around the school, the community hall and the KwaDlamini shop. They started with a short presentation in each of the places encouraging others to join in and support them to clean up their school. All in all they attracted about 56 learners and had a lot of fun while cleaning up. Of course in Zulu style, there was lots of singing, dancing and chanting slogans related to keeping the environment around you clean.

Before the event learners from Sonyongwana High School had approached the municipality to support the schools in disposing of the waste in an ethical manner, so that most of the waste can be re-used and recycled rather than being buried or burnt. We are speaking to PETCO to introduce pickups at three different schools to educate communities in the disposing of their waste.

This entry was posted in Project 90, Project 90 Clubs. Bookmark the permalink.