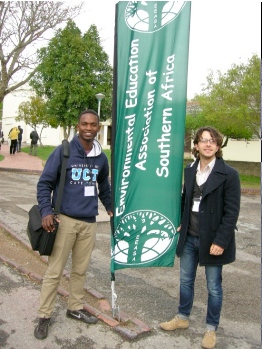 Dan and Nkosinathi at the Conference

Since I’ve worked at Project 90 I hadn’t taken the opportunity to attend a conference, so I was very excited to go to Grahamstown for the Environmental Education Association of Southern Africa’s conference on 11-14 September. In fact I was originally invited to co-present with my colleague, Jeff Blair, who is doing similar uplifting work with schools in Seattle, USA. Unfortunately he was unable to attend and I went accompanied by one of our very inspiring Project 90 Club Mentors, Nkosinathi Mncwabe. The overall aim of the conference was to focus on Environmental Learning, Agency and Social Change. But for me, I really wanted to connect with new faces, find out about other similar initiatives in Southern Africa and offer Project 90’s perspective on creating carbon clubs in schools.

To show our commitment in reducing our carbon footprint, Nkosinathi and I took a 15 hour bus journey from Cape Town to Grahamstown . In that time I could fly to London, sit and have several cups of tea with my family who live 20 minutes from Heathrow and still have time to watch a two hour movie! However all my efforts of carbon cutting were obliterated when Nkosinathi arrived at the bus station dragging a humongous suitcase behind him. I’m sure I could feel the bus pulling out of the bus station straining to reach second gear and tipping to one side!

When we arrived, having only had a few hours sleep we attended the opening ceremony and surprisingly managed to stay awake. It happened to be EEASA’s 30th birthday this year, and we were royally treated to much more than just a conference. We had a gala dinner on the Thursday night and went on excursions to see one of eight environmental projects around Grahamstown. I chose to visit the Eco-Schools and was amazed to see the incredible work they are doing. Delegates had even composed songs to celebrate the work EEASA had done during this time. Before I left, my idea of a conference was sitting through long academic lectures on educational initiatives and research projects by renowned scholars. Instead this conference struck a real balance between the wonderful academic work, the inspiring grass-root projects and the ‘joy’ we find in and around environmental education. 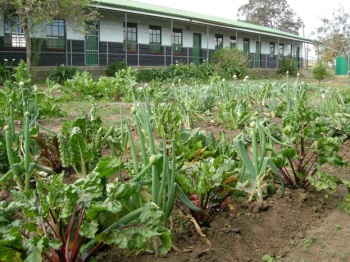 During one of the first keynote speeches, Dr. Bob Jinkling from Canada spoke about the importance of not taking anything for granted, to insist upon asking the same questions over and over so that we don’t lose sight of what we are doing. He also spoke about the need for resistance to create innovation, that by going against the grain allowing criticism and non-conformism, we would cross into change and breakthroughs in our work. I really identified with this and it set the tone for the next four days stimulating a lot of questions about my own work with the Project 90 Clubs.

Are carbon cutting clubs still relevant? What are the benefits of being a Project 90 Club? Is what we are doing with the clubs effective?

Throughout the week Nkosinathi and I attended presentations from people working with environmental clubs; schools, government and NGOs. There were a large delegation of Botswanans, many of whom were school children. They spoke about the inspiring work they’ve been doing in their environmental clubs. Some of these learners were as young as 8 years old and spoke to a lecture theatre of 400 people. What an incredible opportunity. I really hope the Project 90 Clubs also have a similar opportunity in the near future.

Project 90 stall where we sold T-shirts and booklets

I made a short presentation to an intimate crowd on my clubs work at Project 90 by 2030. In fact I had planned to present a ‘Prezi’, which is a glorified powerpoint presentation on steroids. But with many things nowadays involving a computer, there were technical problems. Unfortunately I had to be online to do the presentation and there were numerous problems trying to access the internet. So, I resorted to the old school presentation – ‘speaking’. It went surprisingly well and inspired a gentlemen from the National Centre of Environment in the Democratic Republic of Congo to start setting up carbon cutting clubs in his country.

It was also good to see old faces. Liz Taylor, our previous Project 90 KZN coordinator was attending her with husband Jim Taylor who has been instrumental in the creation of the Environmental Education Association of Southern Africa for the past 30 years.

All in all it was a valuable experience and helped put my work into perspective, enabling me to look for further opportunities and to create and nurture new and existing networks. I hope to be able to attend further EEASA conferences in the future. Next time I’ll make sure Nkosinathi packs a smaller suitcase!

One response to “Project 90 participates in National Education Conference”