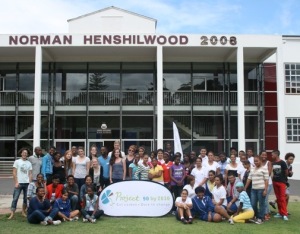 All week I was checking the weather report on a Norwegian website linked to weather stations all over the world. I was comparing it to a weather app on my mac dashboard. The Norwegian website indicated there would be rain at the weekend, and the weather app showed cheerful sunshine and warm days ahead, but I had a sneaky suspicion my mac was lying to me. How can two weather reports be so different? And it’s just customary that rain arrives on the big day you’ve been planning for weeks, even months.

By the time Saturday arrived, the weather was cool and cloudy with a splattering of rain from the evening’s showers. In the back of my mind I was cursing my Mac weather app knowing I should never have looked at it in the first place. However I was pleasantly surprised when I arrived at Norman Henshilwood High School where the Clubs Conference was about to take place. The sun was poking through the clouds and I knew from that moment the weather was going to hold and we were in store for a great weekend.

After last year’s event at St. Georges Grammar, a keen grade 9 club member Tasneem Daniels, said she would love her school to host the next conference. Since November 2012 I’ve been meeting with Tasneem, her club and her teacher Ms. Donough. Tasneem told me her ideas for creating a club weekendcamp. This was always something I wanted to do with the clubs but never gotten around to doing it. Together we’ve been planning and putting together a programme that reflected both the needs and passions of Project 90 and the club on a shoestring budget. It was the first time for this type of engagement working collaboratively with a school, instead of creating and running everything myself. It was an absolute joy teaming up with the Norman Henshilwood Club. 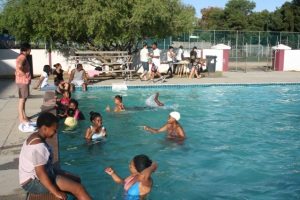 We had a braai round the pool on Saturday evening

There were so many highlights from the weekend, from the music pumping braai pool party, to Happy unconvincingly preparing the fire for the braai, to five guys including myself attempting to put up a tent and watching 40 teenagers huffing and puffing doing exercises at 7am on a Sunday morning!

But there were two highlights that really stood out. Firstly, two incredible grade 10 learners, Lindsay and Kristen, each gave an inspiring talk on leadership. They spoke so confidently and clear about what leadership means to them and how they apply it to their lives. This then led to discussions and debates amongst the club members on the qualities of a good leader, in the frame of their Project 90 clubs. Secondly I witnessed how well teenagers from different schools, ages, cultures and backgrounds interacted with one another. I hope that this camping experience will be a memory that will stay with them for years to come. 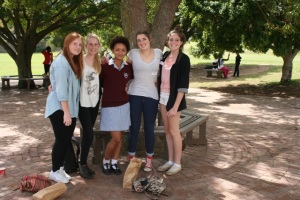 As always we gave the clubs an opportunity to start planning their activities for the year.After some brainstorming with their mentors, clubs started creating a project for the year. It was a good opportunity for the Project 90 team to to help develop their plans into something realistic as it’s important they feel they have achieved something tangible by the end of the year. Macassar High School will be finding ways to open their recycling programme out to their community, whilst Rhodes High School will be extending their recycling from just paper to plastic and cans. Their group is so big now they will be dividing into sub-groups! Norman Henshilwood want to develop a recycling depot at their school and are devising a plan to get permission from their principal. At the same they will be raising awareness about energy saving in their school community. Somerset College will be working on ways to rehabilitate the river that runs through their school property. It’s over run with non-indigenous plants and has been polluted from the school pool close by.

We’ll keep you updated with how our clubs are progressing with their projects thoughout the year.