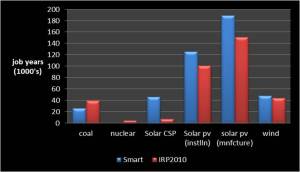 One of the major arguments that the pro-nuclear industry has come up with for continued investment in this expensive and dangerous power source is the creation of jobs.

The Nuclear Industry Association of SA (NIASA) estimates that Nuclear-1 will need 270 project managers at the start and a further 380 if Nuclear-2 is also built at Thyspunt, giving an Eastern Cape total of 650 incoming project managers. The committee said the nuclear programme would need 1 200 project managers across all three plants, as well as 300 engineers. The report calculated that each reactor would require a total workforce of 5 630 personnel (with no clarity on how many of these jobs would be localised).

When we look at the actual breakdown, however, we read that the on-site construction labour requirement for one Generation-III reactor is comprised of:

We can see that the proposed Nuclear build will indeed create jobs – but for whom, exactly? And how many of these jobs are likely to be for unemployed South Africans?

The NIASA Skills and Education Sub-Committee report of March 2012 says that R5.2-billion would have to be spent on higher education over the next 20 years to serve the planned new nuclear build. Sustainable jobs can be had for a lot less money: in off-the-shelf solar photovoltaics, wind energy, natural gas, land-fill, energy efficiency, and so many more low-tech, embedded and do-it-yourself applications that are now proliferating world-wide.

In South Africa efforts to improve access to modern energy services can overlap with broader solutions to social problems such as: intergenerational poverty, extreme inequality, unemployment, housing and health.

Smart electricity planning recognises that, before we sign up for expensive, restrictive, environmentally destructive and outdated centralised power solutions, it would be wise to consider energy conservation and efficiency, effective demand management initiatives and job creating renewable technologies options first.

These options are readily available to us, can create jobs for South Africans and make financial, social and environmental sense.

Solutions that truly do address unemployment, do not lock us into long term debt, improve wellbeing of people and slow the pace of environmental degradation are the key building blocks for an energy secure future in South Africa.

In general, the extremely high levels of unemployment in South Africa are approaching crisis point. While Coal-fired and Nuclear power plants are large and centrally located, Renewable Energy power plants and small-scale solar and wind solutions can be distributed all over the country, thereby providing a more distributed allocation of jobs and ensuring that energy supply distribution losses are reduced.

Renewable Energy and energy efficiency offer many opportunities precisely because they are available at many scales, some which are more feasible for women and poor communities to access for direct and fast benefit.

So why would we choose to pay large sums of cash to international nuclear power companies instead?

The Smart Electricity planning report was published by the Electricity Governance Initiative of SA (EGI-SA) in April 2013. Download it here: http://www.egi-sa.co.za/smart/smart-electricity/