Climate Change conference, gibberish to me but it shouldn’t be 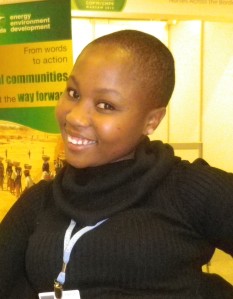 CONFERENCE of Parties (COP19) is now over after two weeks of negotiations at the national stadium, which was the primary venue for the COP in Warsaw, Poland. A space that was utilised very well – I got great ideas for the Cape Town Stadium, a great stadium that has recently earned itself the name “white elephant” for being underutilised.

It was cold, grey and miserable. Especially, considering the day I left Cape Town, when spring was in full bloom. This was my first time attending a COP and I felt overwhelmed and overstimulated by the volumes of information being disseminated in the sessions and side events. Many times I sat in the meetings and felt a little out of my depth – like a fish out of seawater trying to stay alive in freshwater.

What really got to me were the abbreviations used for almost everything that was discussed. Even after the first week had passed I still had difficulty grasping what was being said. I imagine that this is the very reason there is a serious disconnect between society and what is discussed at COPs? It all seems so foreign!

Some South Africans knew about COP17, which took place in Durban. However, all was soon forgotten – no one spoke of it, not even the media, making it seem even more abstract than it actually was. This is a sad reality indeed. How does all of this relate to someone living in South Africa?

Is it not important to us? Why is it that the most vulnerable are often left out of information-sharing circles?

Who is responsible for connecting the dots and making people understand the reasons why we should act to combat climate change?

Negotiators seemed to be walking around in circles (and I mean this quite literally) trying to get from one meeting room to the next in the stadium while not getting to taking decisions. I believe this is where we fit in – as civil society and even more so as the heirs to the Earth.

When do we, as society, stop waiting for the negotiations to take place and begin to rise to the challenge with wisdom and urgency to combat climate change? The scale of our actions currently in response to climate challenge is not sufficient. Many have become frustrated at the rate at which decisions are taken at these conventions.

We all know by now that climate change does not impact only certain areas or people, but rather has an affect on all current and future generations. Thus it is important for us to understand what is happening now, as well as what goes on with the respective subjects in the meetings and decisions taken; to learn the “language” and impart the knowledge gained to others.

I imagine no better way to participate in a way that sustains life, rather than destroys it. Phethang Mabeba Project 90 delegate to COP19 Cape Town

One response to “Climate Change conference, gibberish to me but it shouldn’t be”