Club members present their projects for the year

‘Sawubona“
“…?…”
Laughter.
“Don’t worry, the kids are not laughing at you. They are just laughing ’cause they know you don’t understand their language. We use ‘Sawubona’ for saying ‘Helo’. It means ‘I see you’. You have to answer ‘Yebo’”
“Sawubona”
“Yebo”
Laughter and happiness.

That was one of our first lessons introducing us to KwaZulu-Natal and to the Zulu culture and language. Nicole and I, along with our fantastic companion, translator, guide and friend Nqobile Masuku, Project 90 Clubs coordinator in KZN, were hiding in the shade at Hlokosi High School, waiting for the bell to ring, under the shady trees the Club members had planted. We were a bit nervous as the bell indicated the start of our assessment, but much less than we had been at our first one. How will the students react to us? Will our workshop work out as planned? Could communication cause any problems?

Our second visit was to Kumkane Primary School. Our nervousness had vanished after the initial ice breaker, as did the initial shyness of the children. After two hours of talking, writing, painting and discussing, the group was very eager to present an impressive play they had performed in front of the school to raise awareness of their environmental actions. We also got a chance to admire the vegetable garden that the learners had created. In just under three hours we had completed our second school visit and left 35 smiling children to arrive in time at the next school. At Ginyane High School we saw how a lack of resources and attention caused big frustrations – an open gate allowed the goats to eat all the cabbage in their food garden, which upset everyone including the principal. Satisfied with a good understanding of what the Clubs were doing, we drove back to Creighton, over rolling hills and down winding roads guided by the afternoon sun. Exhausted, we skipped the sunset in favour of getting some sleep before supper to prepare for the next day.

Nqobile, our Clubs coordinator in KZN assists the clubs members

Over the following days we saw beautiful sunsets and more impressive schools and Clubs. The remote KwaThunzi Primary School enchanted us twice – by the beautiful mountains that surrounded us, but especially by the song and dance the children presented to welcome us (and to bid farewell because we asked to see it a second time). At Sonyongwana High School in Creighton, we met a small group of very engaged learners who were active in initiating a recycling system in their area, willing to face big challenges.

The bus from Durban to Johannesburg brought us to a different reality and a different mission – from rural KZN to the metropolis where we spent one week with the former Project 90 legend Glen Tyler and his wonderful housemates. Our aim was to assess the Day of Action held at the Johannesburg Zoo early in September 2013 and to understand its successes and challenges, so that it can be improved on for future events. We met a lot of people involved in various ways, as well as some of the schools that took part. 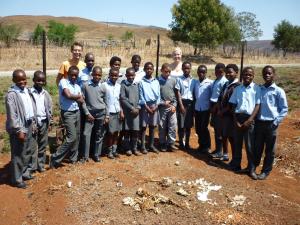 Club members perform a song for our volunteers

Clubs Mentors gave us good insight. Zanele Mabaso gave us a short summary of what happened on the day. Limpho Kou, who rehearsed a play with the children from Saxonwold Primary School, imagined more artistic contributions and was impressed of what the students knew about sustainability – and what she could learn from them. A real highlight was meeting Gordon Ayres at the Jhb Zoo. He showed us the venues where the activities that took place on the Day of Action as well as the educational centre, the biogas facilities and the solar panel installations. He also shared his critical thoughts and precious ideas with us over a milkshake. We got good insight into what it takes to be a club mentor by listening to Connor Berning. The learners of Immaculata High School and the German School spoke to us about their motivations for engagement, and their visions and ideas for forthcoming Days of Action. Our impression is that the Day of Action was a great success and, as it was the first one of its kind, there is a huge potential in making it an even bigger and more powerful event. We left the city fantasizing about attending the Day of Action in 2014, with the conviction that it will be even better the next time.

They were unique days spent in KZN and Johannesburg and with unique people. We talked to inspiring and inspired people, whilst listening to their passions and challenges as they engage on environmental issues in their communities. We saw a lot of smiling faces and listened to many children singing, which always left a smile on our faces. Lastly, we felt that we had contributed to a meaningful project, having received positive feedback on our visits, encouraging the Clubs in their projects and lifting their confidence to create change in their schools.

This entry was posted in Project 90, Project 90 Clubs. Bookmark the permalink.