A youthful call for youth-inclusive policies 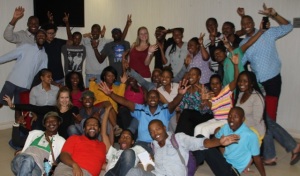 According to Stats SA, South African youth make up the vast majority of the working population[1]. In the coming years, the youth of today will become the leaders of tomorrow’s society. How that society lives, depends very much on the policies that the country has in place today.

Given the significant role that youth play now and in the future, it is surprising that the youth do not feature more prominently in pertinent development plans for the country. For example, if one looks at the National Climate Change Response White Paper (NCCRWP) and the National Development Plan (NDP) – there isn’t adequate focus or inclusion of the youth. By way of example, if you conduct a quick search for the word “youth” in the NCCRWP document, the word “youth” only appears three times, and twice in the same sentence.

One must commend the Office of the Presidency for taking the initiative to draft a National Youth Policy (NYP) – the document was released for public comment at the end of 2014. The vision for the document says, inter alia, to build better livelihoods for all.

However, the document does not take into account the implications of climate change – an issue that not only has begun affecting lives, but will do so, well into the future. As a young South African, I would have liked to see in the building of “better livelihoods for all”, contingencies around the education of climate change impacts throughout the schooling curricula, so that whatever career choice a learner makes, they will have a firm understanding of the impacts their career poses whether they be environmental or social or economic impacts.

The NYP draft was drawn up for the youth, and as the youth we were given the opportunity to submit our inputs on the draft policy. One of my main concerns with this draft as it stands is that it looks at the youth from the perspective of being receivers or benefactors of the Government’s initiatives and not as contributors or active citizens. In our submission as the YouLead-Collective on the draft youth policy to the Office of the Presidency, we stated this point and offered our recourse. The YouLead-Collective focuses on engagement with youth in South Africa. The YouLead-Collective aims to create a community of young informed global citizens that support positive change specifically around climate-related issues.

If we want to increase participation from the youth and decrease unemployment by way of creating small businesses as outlined by the NDP – creating an enabling environment for entrepreneurial growth is vital. Over the years we have seen investment in entrepreneurship rise steadily, with a number of institutions emerging to foster this need for small businesses and the youth.

What about the creation of a a semi-formal business sector? Where we encourage youth to start at the informal level to gain vital experience of simple concepts like supply and demand. As their experience grows, the young entrepreneurs can migrate into the semi-formal sector, where the focus can be on building business running skills and further deepening business expertise in the lead up to establishing formal businesses. Would this not encourage more youth to opt for entrepreneurship as a career choice, giving the country the opportunity for the economic growth it envisions?

On a number of occasions, we have heard of the difficulties of including the youth in decision-making structures, many of which have direct implications on the future of the youth. The question now becomes one of how do we rally ourselves together as a collective of youth, so we can start to better lobby, advocate and mobilise ourselves to become more visible not only to the state, but also to the youth demographic.

Change is urgently needed from the business as usual model. Change that builds better, more sustainable livelihoods for all that take into account growing global issues that have immense multi-faceted implications such as climate change. There is an urgent call for youth to get involved, to learn, and to take part in policy making platforms and to make our voices heard.

Reading through policies like the National Youth Policy, it bothers me that the youth are seen as benefactors as opposed to active citizens and possible change agents. I was once told by a colleague that movements are created by the youth and the working class. If this is indeed the case, we as the youth of South Africa, and the emerging working class are very well poised to bring about change.

Thando is the Community Partnership Programme Intern at Project 90 by 2030 and a member of the YouLead-Collective.

This entry was posted in Uncategorized. Bookmark the permalink.