The Swartland is traditionally known as the bread basket of the Western Cape. However, with the ever-threatening impact of climate change and global warming, this might change within the next fifteen to twenty years.

This climate change workshop took place in the exquisite village of Goedverwacht, a Moravian Mission station. Goedverwacht lies in a fertile valley, about twenty minutes drive from Piketberg, on the N7 highway. We were graciously hosted by a participating farmer, Charles McCullam and his wife Sarie. Charles and Sarie farm with vegetables, sheep, cows and have some goats. However, Charles says he only keeps the goats because he grew up with goats, and it would be strange not to have goats around – and they’re not there for milk, or meat… Sarie and Charles offered us the most delicious Snoek (a local fish) and sweet potatoes (from their garden) lunch I’ve tasted in a long time.

In fact, if you are interested, Goedverwacht will be hosting their annual “Snoek en Patat Fees” later this month, 26th & 27th of June 2009. It promises to be a festival of fun, laughter and great food!

The workshop introduced participating farmers to video media, as a tool for interviewing, co-operative learning, teaching, and storytelling. The farmers spent some time video-interviewing each other and had incredible moments of fun, long-held dreams fulfilled,  and appreciating the opportunity to tell their stories. 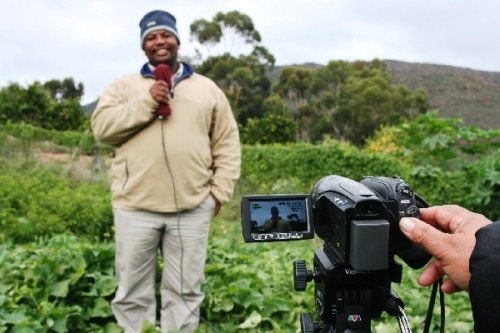 Pic: Karools being interviewed by the ‘director’ Augusta (a Goedverwacht farmer).

Our workshop was the third in a series as part of our International Development Research Centre funded pilot study into the effects in climate change within the Swartland region, and how small scale farmers in the region are adapting to its impact. The study is facilitated in partnership with Indigo Development & Change, who manages the project. In brief, the pilot study activities include the following components:

So far we have completed three climate change adaptation workshops, gathered info on climate change trends in the region, started researching alternative crops, published two newsletters of the “Warm Patat” (the “hot sweet potato”), and have just started with participating farmer-led video interviews on the socio-economic context of the region, their personal farming experiences in relation climate or weather changes and adapting to it. Rhoda Malgas and Bettina Koelle, from Indigo Development & Change, also presented a paper about the study to date at the recent “Strengthening the Eco-Justice Movement: how will disenfranchised peoples adapt to climate change?” Conference in Toronto, Canada.

Our work with this group of small scale farmers is very fulfilling, and challenging. Fulfilling as it provides us, Indigo Development  & Change, and a larger research community some insight into what to expect on climate change impact and ways to adapt within the Swartland region. Fulfilling also because it provides the farmers with tangible data on past and predicted weather patterns and climate changes for the region, innovative ways to adapt to those changes, and seeing first-hand how some of the famers have started shifting their farming practises to the already observed and experienced climate changes.

Pic: Gavin Armstrong – farmer extraordinaire – demonstrates one of his home-designed & built farming implements, while Ralph (a Goedverwacht farmer) looks on. Taken at our 2nd Workshop.

It’s challenging because some of the farmers are faced with larger development issues like access to arable tracts of land, inadequate water resources, fighting with landlords, the lack of department of agriculture support, and the future financial sustainability of their subsistence operations. Hopefully this pilot study can assist some of the farmers in addressing these issues.

Soon we will host our last worksop within this pilot project, and the learnings, outcomes achieved, challenges faced, and developmental areas (read weaknesses) will be revealed. We’ll keep you updated on our progress and with more information, photo’s and video clips from the project.

Until then, stay warm, and Dare to Change!

Grow to Live: A Soil for Life gardening workshop

I spent the past weekend with some fantastic people participating in a “Grow to live” gardening course with Soil for Life, a non profit organisation based in Constantia, Cape Town. Soil for Life teaches people to grow their own food and it works with the premise – healthy soil, healthy plants, and healthy people!

The Grow to Live workshops happens once a month and is a comprehensive, hands-on gardening workshop that teach you how to grow your own organic vegetables in small areas, at home, your office, or community garden. The weekend course introduces the basic concepts of soil building, composting, mulching, trench gardening, pests and disease control, companion planting, seed saving, container gardening, and vegetable harvesting tips.

The course was scattered with practical, get-down-and-dirty-activities which provided a great platform for putting theory into practise. We were all eager to dig soil, plant seed and seedlings, build a trench garden and sample some of the fresh organic veggies and fruit from the Soil for Life garden! The figs are delicious! Bugs, insects, and birds thrive in their garden! By the end of the weekend our group had constructed a two metre by one metre trench garden, planted it with seed and seedlings, creatively labelled it, and were very proud of our achievement!

I was thrilled to be out in an enchanted garden for a weekend, but I also learnt so much about biological processes, the connection between pest control and predators in a garden, building soil nutrients, and having fun whilst doing it. Pat Featherstone who facilitated the course, is an excellent teacher with such enthusiasm for sharing her experience and knowledge with willing learners. Thank you Pat!

So, if you want to learn how to grow your own organic food, or need advice and help with your current food growing initiatives, or want to buy seed, seedlings or pick-your-own veggies, visit them in Constantia, or visit Soil for Life.

We’ll post some news in the coming weeks about our new, in-process vegetable garden at our office.