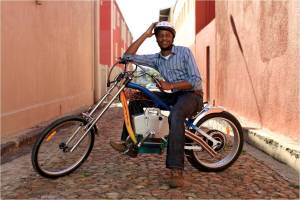 Some of you may have seen the Bicycle Portraits Project featured on our Blog a few months ago. This great initiative promotes cycling in South Africa, touring the country to find out who rides bicycles, why they ride bicycles, and of course why so few South Africans choose bicycles as a transport option.

Here is a recent interview with Vuyo Sangweni, a radio producer in Cape Town, who feels that we need to break the stigma around riding bicycles. The Bicycle Portraits Project is looking for help, so please take a minute to visit their website and please support them in any way that you can.

‘I work with Thula Lula bicycles, we are based here in Woodstock. Currently we saw the opportunity with the current situation in terms of global warming and the emissions – we came up with the idea where we bought some electric bicycles, to rent them out to tourists. Because when these tourists come they tend to hire the SUV’s and those things, they damage our country and the environment we live in. At the moment we have 10 bicycles.

I’m also a radio producer. If I’m working on my script for radio I and my head gets stuck I just grab a bicycle and ride and clear my head! It also helps you with your health – that’s the beauty of a bicycle, a lot of things : the environment, even yourself, you tend to get healthy and you’re saving on the pocket also in terms of gas and all that stuff. I would encourage people – even if it’s not an electric bicycle, just a normal bicycle – to ride a bicycle.

I wasn’t born here in Cape Town – I’m from the Eastern Cape – I have a bicycle there. But to come with a bicycle from a very rural area to here is a no, no… I think it’s within us black people. For me, as you can see, I work in an office, I’m educated, but it’s a matter of status – you can’t be a radio producer and ride a bicycle. You know, I speak for black people – they would say “Why don’t you have a car?”. They’ve got this idea that you’ve got money, yes – you’ve got money but you also have to think of the environment as you get educated about such issues. So I don’t own a bicycle here right now but when I’m here at the office I get to enjoy riding this one. When I have meeting I just ride it around Cape Town, I enjoy it a lot.

A friend of mine gave me a call, she’s a police woman – in the communications department – we’ve been close, we’ve been friends for many years, she called me and I said I’m riding a bicycle – and she was like laughing! And she wasn’t just laughing like it was funny, she was like “Vuyo, why are you riding a bicycle? You’re a radio producer! Why are you riding a bicycle? You should be driving a car!” We need to break the stigma that when you ride a bicycle you’re poor. Because people have that mentality of thinking “Wow, you are riding a bicycle – you are poor. You have to drive a Mercedes or whatever.” Which is quite wrong. I know guys who are executives that I’ve seen that are riding bicycles, and they are quite comfortable with it. I don’t know with us black people… I don’t want to politicize it, but it’s just the thing that’s there.

Maybe the media have sort of shown people that for society to recognize you – that you are successful – you have to have a car. But bicycles, health wise, for the environment, for your money – you are doing a lot for the heart. So that friend of mine was like “Wow, you can’t be riding a bicycle.” And she put on Facebook that she called me and I was riding a bicycle!’