Power behind the scenes

It must be rather funny if you are a clown fish or a jagged-tooth shark residing at the Two Oceans Aquarium. When the doors open every morning, you will be greeted by adoring wide-eyed fans, anxious to take photos with you; people standing in pure awe and shaking their heads in disbelief that they have just met some of the world’s most famous inhabitants.

But what a lot of those fans are not aware of, is all the activity that goes on behind the scenes to keep the likes of the butterflyfish and loggerhead turtle in top form.

In addition to the dedicated team at the Two Oceans Aquarium, there are many systems in place, including energy and water systems, which run continuously so that the aquarium fan walk is as enjoyable and educational as possible.

The Two Oceans Aquarium first teamed up with us in 2010, when we set off on a journey to make renewable energy awareness more accessible to South Africans. We seek to inspire as many South Africans as possible to shift gears and change how they engage with their environment.

This journey led to renewable energy and energy efficiency installations and awareness campaigns in key public education footholds around the country – including the Johannesburg Zoo, the National Zoological Gardens in Pretoria, Durban Botanic Gardens, Sci-Bono Discovery Centre in Johannesburg, and of course the Two Oceans Aquarium in Cape Town. Installations included solar-powered golf carts at Johannesburg Zoo and the National Zoological Gardens; and, a solar tracking system at the Durban Botanic Gardens.

The initiative also took Project 90 to more remote locations, in KwaZulu-Natal, such as the Reichenau Mission Station where a hydroelectric system was installed to provide energy to the nearby community, and rural households in the Marianhill area, which were fitted with solar home lighting kits. 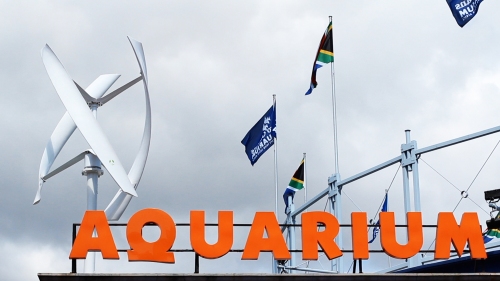 The collaboration with the Aquarium as a leading sustainability and education institution, led to the installation of a vertical wind turbine, located at the entrance of the Aquarium, and a series of solar panels. These were installed to offset some of the electricity consumption of the Aquarium’s administrative offices.

Fast track to 2013, our work has expanded to include more water saving initiatives – at the Aquarium, at Johannesburg Zoo (including the installation of rainwater harvesting units and solar-powered water purification unit) and enhancing water security in two rural villages in the Eastern Cape and KwaZulu-Natal.

Last year,the Aquarium and Project 90 by 2030 teamed up once again to extend the renewable energy and energy efficiency installations and water saving initiative – but this time with a few innovative twists.

This phase of the project saw the installation of heat exchangers – which all sounds rather technical, but essentially what the system does, is to cool the air-conditioning chillers at the aquarium using seawater. While the system itself does save energy, the biggest saving is on water – approximately 4000 litres of water (a limited or finite resource) on a daily basis. On top of this, the capacity of the existing solar panel system was also expanded.

The most talked about and innovative aspect of the collaboration was the design and building of a wave turbine – which captures the wave energy from the kelp forest exhibit.

Since the opening of the Aquarium, some 19 years ago, a wave has been generated in the kelp forest exhibit around the clock via a plunger system, to keep the kelp and other plants alive.

The wave turbine was the brainchild of Mike de Maine, the technical manager at the Aquarium, and his team. Essentially what the system consists of is a box partially submerged in the exhibit. At one end of the box is a tube with a turbine fitted inside. With every up and down movement of the wave, air is either being pushed out or drawn into the box. This movement of air turns the turbine, which in turn generates electricity.

The electricity generated is used to power educational materials on the initiative. Watch our film of the installation here.

The turbine has been clocked with wind speeds of over 100 km per hour.

The wave turbine project is an example of sustainable human innovation working in sync with nature. Our hope is for human-nature synergies to be the way of the future.