Richard in a recent adventure in Turkey

Richard Halsey, our Financial Coordinator,  is a mix of many things. At Project 90 he is part of our operations team, assisting with our finances, budgets and payments. But on the weekends he is adventuring on any vertical surface he can grip his fingers into!

In November, adventurer Richard will be joining the Lost Mountain Project. This exciting expedition to Mt Namuli in Northern Mozambique will combine research, conservation and rock climbing. The resulting media and film will aim to raise awareness about the treats to this fragile environment and how partnerships and collaborations with local communities and organisations in Mozambique can lead to positive change.

The Lost Mountain is a project about discovery, adventure, and ultimately survival in one of the world’s least-explored and most-threatened habitats. Mt. Namuli, a 7,936-foot granite monolith, is the largest of a group of isolated peaks that tower over the ancient valleys of northern Mozambique. Here, plants and animals have evolved as if on dispersed oceanic islands, so that individual mountains have become refuge to their own unique species of life, many of which have yet to be discovered or described by science. Yet despite these distinctions, it is Mt. Namuli’s linkages to the surrounding landscape and its position along a corridor of mountains stretching from South Africa to the Arabian Peninsula that has gripped the attention of the world. 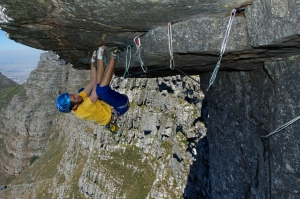 This project combines climbing and conservation

The Lost Mountain project is a collaboration between an international cadre of scientists, conservationists, global adventurers, and filmmakers. Their objectives are:

Please visit the Lost Mountain Film website for more information,  and we’ll keep you posted on how it all went.